When you say Damascus steel

Damascene steel is also famously called damask. It is according to the capital of Syria, through which it used to be imported from India. Today, under this name we mean a material that consists of multiple types of steel that are folded into layers and welded in blacksmiths. But before that, it was a little different. 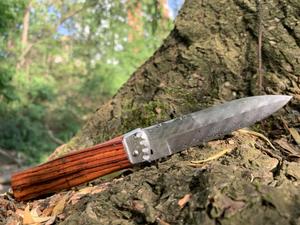 Historic damascus steel was used mainly for combat swords. It was so firm that it was possible to cut through enemy armor with such a weapon, and at the same time, it was possible to bend the sword without damaging it from tip to handle.

The production of historic damascus steel was very expensive, and above all it was secret. The old masters passed her secrets from generation to generation and often took it with them to the grave. As a result, few people know how this steel was produced today.

Therefore, its place has captivated what is today considered damascene steel - a material created by multiple folding, translating and re-folding strips of different properties. Their later etching creates a specific pattern that masters can develop into unprecedented beauty. However, especially the combination of hard and brittle steel with soft and flexible steel will give a material with unique properties.

Some blacksmiths themselves create damask steel, but they can also be purchased from manufacturers. Mikov uses damascus steel for luxury editions of knives. Of course, these include the Predator ejector knives, especially in the Jaguar design, but it is also found in the blades in the luxurious versions of the classic Rybička.