Mikov s.r.o. Mikulášovice. Products of brands Mikov and RON / Articles / Blog / The Story behind the Birth of Predator

The Story behind the Birth of Predator

A young developer, Vladimir Trojan, knocked at the door of the Mikov's director's office in the 1970s. He had a busy night in the workroom, and he was tired. The director was used to his morning arrivals, as Vladimir usually worked on new products overnight. 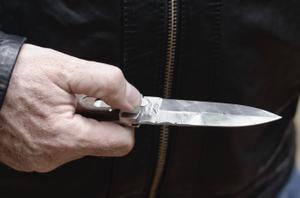 This time, however, the director saw his unusual nervousness with which he handed him a knife which he had previously opened just by pressing the small button on the handle. He stood up in surprise from his big mahogany table, took the knife into his hand, tried the closing system and the perfectly working ejection mechanism, nodded respectfully, and said, "Vladimir, that's good, we'll put it into production." Trojan's fears that nobody would make such a knife in socialist Czechoslovakia disappeared. Immediately from the director's office, he enthusiastically headed for his workroom and quickly went on to work, regardless of his sleepless night.

Somehow it probably seemed to be the first introduction of the switchblade knife, which is now known as Predator. Vladimir Trojan had this idea in his head as he worked in the development department of Mikov. When he joined the company at the end of the 1950s, he was a trained cutler and knife-lover, full of ideas and improvement suggestions. It was impossible to keep it a secret, so he soon went into the lead of the development workroom where he drew and designed all Mikov's knives. But an ejection knife was something completely different.

He thought about it for a long time. He knew that before the Second world war the automatic knives had been manufactured at the factory, but the German workers who had stayed after their removal in Mikulášovice had been silent. No drawings or examples were available. Therefore, to find the right way of construction, so that the knife would be controlled, wouldn't threaten its owner by spontaneous opening and at the same time would be easily made in large series, was a challenge for him. Of course, the knife he brought to the table was not the first version he tried but it was the first version that actually worked.

After the approval of the production, the usual designing process of the blade-cutting devices, forging plates, grip solutions made of both plastic and precious woods, antlers or other expensive materials followed. Then began the production staff training and the knife was finally launched.

It immediately won the hearts of many people. Its robust modern design and safe knife operation have been of great added value. The knife has become very popular not only in the Czech Republic but also abroad - literally from east to west. It even managed to overcome the limitations - because in Russia its standard blade is behind the edge of the law, Mikov began to export shorter blades there. To the United States where the sale of ejector knives was forbidden Mikov exports the knife without the pen that buyers who don't mind breaking local laws can buy it separately.

The Predator's moment of glory is connected with James Bond. When the production of Casino Royale, which was shot in Prague, needed a shooting knife, they probably went to the closest Prague cutlery and bought a Predator. But the actor who used the knife had to turn it so that the Mikov logo wouldn't be visible. Therefore, all viewers of the film could see Vladimir Trojan's cutlery mark on the other side of the blade. The mechanism of each knife must work perfectly, and if the handle is of natural materials, it must be customized for each piece separately. The James Bond knife was made of Damascus steel, which requires great care from a cutler's master who leaves his signature on it.

Predators are still beating the most prominent and also the most popular knives of Mikov. That is why they had been modified several times over the past few years when the Blackout and Stonewash series have changed the blades to Bohler N 690. Customer interest is still exceeding any expectations.

The Predator also inspired rescue knives Rescue, whose ejection mechanism allows firefighters to open it even with gloves.

Although there are several modern-style ejector blades on the market today, the Predator still has its enthusiastic fans who won't hear a bad word said against it. Many of them use it as a so-called EDC, a knife of daily use.